For a glossary of payment processing terms you can refer to if we use a term you do not know, click here.

In most instances, a payment is a simple transaction that is one half of a trade of money for a good or service. In return for the payment the payer receives their goods or services. The most common scenario in the United States is payment via a card, either credit or debit.

In a very few cases, a problem occurs, preventing a transaction from completing. Sometimes it could be because a transaction is declined or a seller wants either a different form of payment or additional identification. Even in those cases, most of the time the reason is simply a card being declined for insufficient funds and a switch to another card or to cash is all that is needed. Much more rarely, there will be fraud - someone has stolen card information to make fraudulent purchases and the card has been flagged as no longer acceptable.

From the consumer point of view, this is irritating, handled by the bank, and in most cases they won’t lose any money and the only inconvenience is a delay in performing the transaction. For merchants it is critical because of the costs of processing, including accepting certain forms of payment (and the associated fees), and additional costs if customers return items or complain. If items are returned, then the merchant may lose some of the transaction fees that were charged along the way. If there is a dispute about the payment that results in a reversal, merchants not only have to return the money, but they often pay a penalty fee and also lose the goods. If disputes happen too frequently, merchants even risk losing their ability to accept credit cards.

Both these viewpoints only look at a slice of a complex system of payment processes. Every payment transaction involves at least three players and most involve more: as many as five or six other entities can be involved. This complex sequence is intended to protect all parties and make sure that funds are properly transferred for real and valid transactions and to identify and block fraudulent transactions.

The factors to consider besides the payer and the payee are the type of transaction, the flow of approvals and the movement of the actual money, the other players involved, regulation and compliance to the law, and criminal activity and fraud.

TYPES OF PAYMENT AND VOLUMES IN 2010

The table below shows payment trends in the United States. The forms of payment growing the fastest (credit and debit cards) have the highest processing costs. The forms of payment that move the most payment volume are the cheapest: ACH and wire transfers. Many of the newer payment forms, such as Apple Pay, are really fronts for one of the other forms of payment whether it is credit card, debit card, or an ACH transaction. The smartphone or other device is simply passing the data for the particular form of payment in a secure manner.

By 2015, the following payment types were preferred for consumer transactions:

A typical payment flow is shown in the following infographic. It illustrates a credit card transaction, but similar processes take place for most other forms of payment with cash being the only one that is substantially simpler.

With every credit transaction, a sequence of queries and instructions takes place behind the scenes along two paths. First, card and transaction data are passed to the card-issuing bank to get payment approval and notification of that approval is passed back. Second, when approval is granted, a new process to transmit money is started. Finally, the money is transferred with fees deducted from the payment by participants in the process. 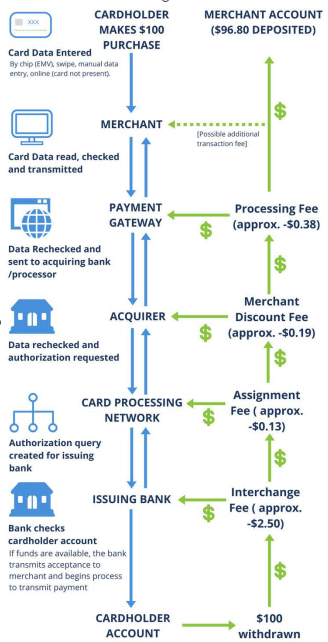 This payment flow is very similar for other forms of payment. The names and identities of the players at each stage may change, but the basic process is passing the transaction information through a series of processors and gateways that perform validation checks before returning an approval or denial message and kicking off a process to pass payment back to the merchant’s account. It is worth noting that each stage often includes a check for various different forms of fraud that can take place during a payment transaction.

There are a lot of issues behind the scenes in taking payments that are invisible to the end user - except when there’s a problem. Issues that the various players in the payment flow, as well as some additional players like governments and regulatory bodies, have to consider include fraud, moneylaundering, other criminal activity and even anti-terrorism statutes.

Top of the list is a system called Know Your Customer (KYC). This requires that certain information must be gathered about customers (in this case, the customers are the customers of the payment processor - usually merchants or anyone else wanting to accept payments) in order to comply with the Banking Secrecy Act of 1970. The Act was designed to foil money laundering and now also covers identity theft, financial fraud, and even terrorist financing. Companies also have to comply with a number of other government - federal, state, and international - requirements. If you’re interested in learning more about these specific requirements, take a look at this more in-depth view of the payment industry.

But regulation and compliance doesn’t end there. Each of the major credit card networks has a set of rules and regulations that must be followed - in some cases, several hundred pages long - and they aren’t always the same. In addition, all the major card networks are part of a compliance agreement called the Payment Card Industry Data Security Standard (PCI DSS) and any reputable payments company must be PCI DSS compliant. The industry group adds to and extends these rules annually in order to keep ahead of developments in the industry, especially fraudulent activities.

PUTTING IT ALL TOGETHER

All of these participants in the payments process must work together to actually conduct a
transaction. This complexity also explains why very few transactions, apart from those involving cash, take place instantly. While the consumer may hand over a card, complete the transaction, and accept their goods, the movement of the money to complete the transaction, a process called settlement, can take anywhere from a few hours to several days as each stage of the process illustrated above is completed. In addition, different fees are charged by most of the entities along the payment pathway and these fees have to be calculated, added, paid for, and reported along the way. For a consumer, the fees are typically invisible and built into the transaction, but merchants and processors are keenly aware of the precise percentages and costs of even a simple transaction.

To find out more about how you can add integrated payments to your software, email
sales@wepay.com or visit wepay.com. To get another view of the payments industry,
click here.

Discuss the best plan for your team

Learn more about which plan is right for you by contacting our sales team.